A surface typically represents the boundary of a solid object in 3D space (R3).

We say a surface is a 2D topological manifold (two-manifold), meaning that at a point on the surface, we can define a local coordinate patch on which a two-dimensional coordinate system is defined.

For example, the surface of the earth is a two-manifold, with positions described by latitude and longitude.

In computer graphics, there are different ways to represent a surface.  In computer games, the typical approach is to model a surface as a collection of polygons (normally triangles). 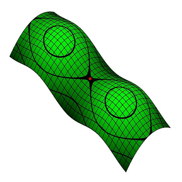