As we’ve seen in the template, a skybox is a simple way to model the background of the scene using texture mapping.

Sky, far away mountains, etc. appear in textures that are mapped to six sides of a box surrounding the camera.

As a viewer moves through a 3D scene, the skybox remains stationary with respect to the viewer.  This technique gives the skybox the illusion of being very far away since other objects in the scene appear to translate, while the skybox does not.

The six images are carefully designed and aligned to avoid seams.  It’s best to render the skybox without any shading. 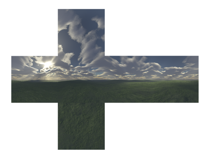 A skybox texture unfolded to 2D