The value stored by the hardware in the depth buffer is a non-linear mapping of the actual depth from the camera based on the near and far clipping planes.

This is done so that objects closer to the camera have more depth resolution.

The mapping is of the form: 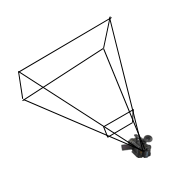 Learning to Love your Z-buffer