Sometimes one would like to render many instances of the same object.
Examples:
In the client program, one could loop over each object and render it:
for (int i = 0; i < N; i++)
glDrawArrays(GL_TRIANGLES, 0, m_iNumVertices);

However, each call to glDrawArrays carries some overhead.  Instead, one can render the entire set with a single call:
glDrawArraysInstanced(GL_TRIANGLES, 0, m_iNumVertices, N);

In the vertex shader, there is a built-in variable called gl_InstanceID.
This variable allows the programmer to treat each instance differently, for example, by applying a transformation. 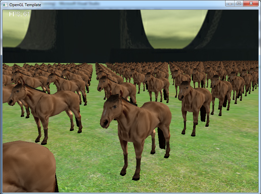